This very simple modification makes the switch of the Slot 3.3 with the Slot 2: 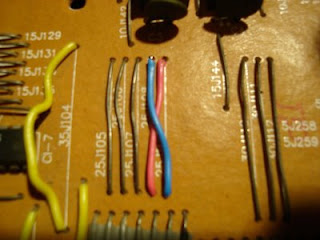 The same change applies to the Gradiente MSX Plus & MSX DD-Plus plus, and such change can be very useful for the following scenarios:

This inversion cause no issues or change any other behavior in the computers.

To proceed and apply the modification simply remove the wired-jumpers labeled as 25J108 and 25J109 and invert them (as demonstrated in the picture above).

Important: as you will have to cross the wires it is strongly recommended to use covered/protected wires, or make sure you isolate them to prevent short-circuit accidents.

That’s it. Your job is done!


The Brazilian MSX Plus and DD-Plus by Gradient.

Original written by B@SS MSX and published in his blog at http://basshp.blogspot.com/2009/05/invertendo-os-slots-plus-ddplus.html